While my 3rd grader is still focusing on multiplication at this age, but there is no reason to wait on starting other concepts.  Just starting another textbook would not be beneficial (at least not for her) at this stage.  However, Montessori "work" makes it very beneficial to and it's easy to overlap.  It also provides some fun in between all that having to memorize multiplication tables!

So, while still working on multiplication, I've added to her list multiplication of fractions with whole numbers. (See past posting for details on that.)  And now we've added another set of work with fractions.

I created a list of fractions in columns and, using the Montessori fraction circles, have asked her to find equivalent fractions using these circles.  After a short demonstration from me, she is able to do this work herself.  She usually does  a few each day, until she's finished the sheet of fractions.  At first, I observe her to ensure she is doing it correctly.  Once she has the hang of it, she can do this work herself and the materials make it self-correcting.

Here is a quick demonstration.

First, I made a sheet with 2 columns and listed several fractions.  (I drew in the lines between the numbers to make fractions once I printed this document.) 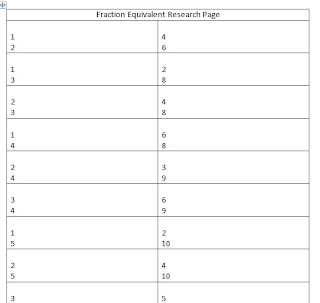 Next, we took out our box of Montessori Fraction Circles (a must for any homeschooling Montessori mom) and I demonstrated how do to this.

﻿
Using the first example - I took out 1/2 circle. I laid it on a surface where it was easy to see.
Then I started randomly pulling out other size fractions to see which would fit in to the 1/2 circle EVENLY. I made sure she understood that we couldn't take different sized fractions to make them all fit. They all had to be the same.

Finally, we "found" that 2 of the 1/4 fractions would fit perfectly into the 1/2 circle we had. So I then wrote in an = sign and showed her that 1/2 is 'equal' to two quarters (2/4). I reminded her that equivalent means equal to.

I then asked her if any other circles might fit into this 1/2.  We put away the 2/4 fractions and started looking for more.  Finally, she found that if we took 4 of the 1/8 fractions they would also equal 1/2.  She continues searching for more possibilities until no more can be found with her circles.

She records all of her work on the sheet I gave her.  Later on, I ask her to look for patterns which many times help to see how she will later to more complex work with fractions.


Typically this concept would not be taught until later years in school.  However, by doing this now, she is building a firm foundation for what is to come.  Fraction equivalents does not need to be confusing at all when done this way.

Much of Montessori works this way.  For example, my son is currently taking what is normally considered middle school-level Geometry.  However, the first several lessons were very easy for him because he had been learning Geometry concepts since Kindergarten - using Montessori materials. So the names of many shapes and angles were very familiar rather than new and intimidating for him.

The fraction circles have so many possibilities for learning, they are worth the cost since they can be used for many years, at many levels.

You can also take this work right into the kitchen and have her help you double a recipe or cut a recipe in half.  This puts the "why" behind the "what" in how she can use it in every day life.

As each has received a gift, use it to serve one another, as good stewards of God's varied grace:
Posted by Sheri George at 5:04 AM

This blog is dedicated to Montessori education and Godly home education.... may we never let "school" interrupt our learning!

Maria Montessori was a Woman of Faith

“We must take into consideration that from birth the child has a power in him. We must not just see the child, but God in him. We must respect the laws of creation in him.” Maria Montessori, 1935 (1989a, p. 98)